What a wonderful, much needed Sunday fun day. Every couple of months we – as in my mom, sister and aunt (also my mom’s sister) – try to have a girls day/weekend, which I like to call, “Our mother, daughter, sister, aunt day.” In the past we have gone to a Murder Mystery Dinner, participated in the Polar Plunge, spent the weekend in the Cities shopping, and spent the day making lefse. A month ago at a farm festival I won four Renaissance tickets. And who else would I take than my girls?!

While we were there we ran into fairies, guys in tights and lots of four legged fur butts. Unfortunately, I didn’t bring Spencer. It was a girls day after all and no boys were allowed to come with us! He, however, wasn’t far from my mind and when we came across a shop called “Royal Paws” I knew we had to stop.

They had numerous amount of gourmet treats, biscuits, and bones to choose from and I wish I could have bought one of everything. But, I ended up narrowing it down to  “Deep Dish Pizzas” and “Peanut Butter Bacon Bones.”

Once we got home he knew right away we had something for him. He was such a good boy and he sat so nicely for me waited patiently until I gave the “all done” command. Of course he gave me the “really mom another picture” look at least two or three times. Once I was finally satisfied and gave him the command he dove right it. Not a crumb was left behind! Another successful day for everyone.
Re-purpose In Style

The best part of being a dog owner is that they don’t care what their toy box looks like or what kind of container holds their treats, food, or water. So take a look in your garage, basement or attic for old wire baskets, cookie jars, big mason jars or bowls and put them to good use again. I went to my parents’ farm and found the old wire egg basket. Through re-purposing you can get that “country feel” without spending the big bucks!
You could also use crates, barrels, tins, or trunks that will give you a cool and hip vibe. Be creative my fellow dog lovers. But most importantly, have fun with it! And always remember – the money you save can be used to fill up your containers with toys, treats and other goodness. You’ll be the best dog mommy on the block!
Picture Perfect

(We rubbed peanut butter on a stick to capture this pic of Spencer and 5 of his litter mates. From the Left: Spencer, Gideon, Sebastian, Abby, Kraelyn, and Leia )
If you are like me, I take tons of pictures of Spencer all the time. He is so use to me taking his picture that he is currently more photogenic then my husband. I don’t know much about taking a good picture, I mean, I just take keep snapping away hoping that I got at least on good one in the bunch.

Here are some helpful tips to help you capture those priceless moments:
Source:
“Want better dog photos? The best dog photography tips for dog owner.” Retrieved from: http://dogs.thefuntimesguide.com/2010/04/dog_photography.php
Getting to know Spencer 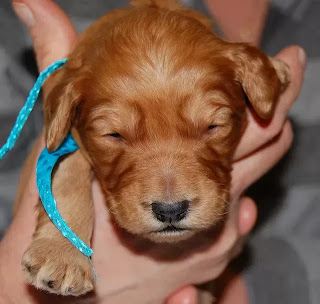 Parents: Mom (Reno)-Golden Retriever, Dad-Standard Poodle
Birthday: January 2008
Eyes: Brown
Hair: Golden with natural wave
Height: 2 feet 6 inches tall on all fours
Weight: 65 lbs of pure muscle and fluff
Interest: He likes long walks anywhere, loves belly rubs, and is obsessed with his toys.
Dislikes: His gentle leader, going to the groomer and watching dogs on tv who he can’t play with.
Goals in Life: To bring a smile to everyone he meets.

Welcome everyone to Spencer’s blog!

Throughout my entire life I don’t think there was one year that we did not have a dog on our farm. Even though I have forgotten some of their names, their memories still live on. And some of them are still touching my heart as we speak. So 6 years ago after I bought my first house, I was thrilled to get my very own 4 legged fur butt.

I was introduced to RAGOM (Retrieve a Golden of Minnesota) through my parents (who adopted their two Golden Retrievers from there). So I submitted my application, had someone visit my house, and started searching the site for the perfect dog.
I then came across a Golden who had given birth to 9 adorable puppies. I immediately informed RAGOM that I was interested. At first, I took a liking to a pup named Sebastian. I was so excited when the day came that my mom, sister, and myself were able to meet the last two puppies available  Sebastian and Spencer. When we got to the foster house all of our eyes light up when we saw them, I mean it’s not everyday you get to play with cute puppies. As I was playing with them Sebastian wanted nothing to do with me, but Spencer would not let me put him down. From that moment on we have been inseparable and the spoiling began.
We have experienced so many adventures through the years that we want to share with you. We also love to find new products, toys, stories, deals, health tips and so much more that we are excited to share on this blog.
Lastly, we hope to continue to bring awareness and education to others about the importance of rescue organizations, human societies, and other adoption agencies that continue to fight the battle against puppy mills.
Thank you for taking the time to check out this blog,
Brittany and Spencer

Dig Around My SIte